Welcome to the August Newsletter

It’s been an exciting few months in the property world, with plenty of chatter about a potential market rebound. Back-to-back interest rate cuts, looser lending conditions and increased confidence following the May federal election have seen buyers returning to the market. In July, five of the eight capital cities recorded a slight rise in dwelling values, so if you’re a prospective buyer, now might be a good time to dive in and seize the moment.
Interest rate news
At its August meeting, the Reserve Bank of Australia (RBA) decided to leave the official cash rate on hold at 1% pa. The decision follows rate cuts in June and July. The majority of economists believe there will likely be another cut later in the year to 0.75% pa.

Most lenders have adjusted their interest rates to reflect recent cuts by the RBA, but it’s still worth shopping around. Some lenders are passing on bigger discounts than others.

Home value movements
Housing values appear to be stabilising, with five of the eight capital cities recording a modest rise in value in July. In Sydney, prices increased by 0.22%, while Melbourne saw values rise by 0.18% during the month. Values also climbed in Brisbane (0.24%), Hobart (0.27%) and Darwin (0.42%). Perth, Adelaide and Canberra all saw prices fall (by 0.53%, 0.34% and 0.32% respectively). In other news, capital city auction markets recorded the highest preliminary clearance rate in over a year (70.6%) in July. 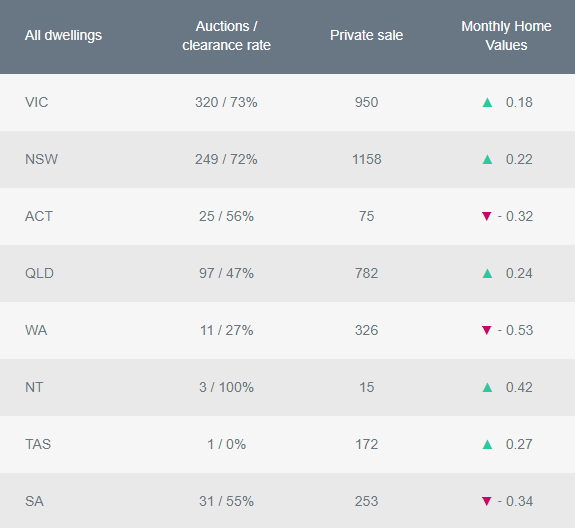 Gearing up for a Spring property purchase?
If you’re in the market for a new home or investment property this Spring, we can line you up with the right finance for your needs. Contact us to arrange pre-approval today!